Plaintiff repeatedly voices consternation in his pleadings about defendant’s distribution of the publication that displayed his work on its cover for profit, but of the many licenses available to choose from, plaintiff selected the one that specifically authorized commercial use. So the only issue before the Court in Count I is whether defendant – which gave plaintiff full credit for the work it displayed on the cover of its publication – complied with the technical terms of the license under which plaintiff published the work. The Court finds that it did.

During the summer of 2013 we voiced our doubts about an initiative from the Center for Copyright Information (CCI).

The group, which has the MPAA and RIAA as key members, had just started piloting a kindergarten through sixth grade curriculum on copyright in California schools.

The curriculum was drafted in collaboration with iKeepSafe and aims to teach kids the basics of copyright. Unfortunately, the lesson materials were rather one-sided and mostly ignored fair use and the more flexible copyright licences Creative Commons provides.

These concerns were picked up by the mainstream press, creating a massive backlash. The CCI and other partners emphasized that the pilot was tested with an early draft and promised that the final curriculum would be more balanced.

In the months that followed the lesson plans indeed got a major overhaul and last summer the “Copyright and Creativity for Ethical Digital Citizens” curriculum was finalized.

As reported previously, the new and improved version was indeed expanded to discuss fair use principles and Creative Commons licenses. However, as far as Hollywood is concerned it now includes too much discussion on fair use.

TorrentFreak received a copy of a leaked email the MPAA’s Howard Gantman sent to various insiders last summer, explaining what happened. It starts off by mentioning the negative response to the leak and states that the MPAA and RIAA will try to keep a low profile in future, probably to prevent another wave of critique.

With bots performing all sorts of intellectual property policing these days, fair use considerations are completely off the table. Nuances that can’t be handled by a bot should theoretically be turned over to a human being in disputed cases. Unfortunately, dispute processes are often handled in an automated fashion, leading to even more problems.

Tolriq Yatse, the developer of a popular Xbox Media Center (XMBC) remote control app for Android phones, ran into this very problem with Google’s Play Store, which suddenly dumped his app over “intellectual property violations” after more than 2 years of trouble-free listing. This might have been a quick fix if Google had been more forthcoming with details, but all Yatse received was a brief notice as his app was removed from the Play store.

Nothing was changed at all apart filling the new forced content rating form and suddenly lost all my revenues.

I hope someone human answer with details soon, but I’m joining the anger from all developers around about how #Google treat devs, take 30% share without problem but certainly do not do support or act as human when killing someone.

His complaints reached his fans and customers, who then made their presence felt. This finally prompted a Google human to give Yatse the details he needed so he could fix his app and get it relisted.

Thank you for your additional comments.

As previously explained, your promotional images include content that you do not appear to have permission to distribute. For example, images related to films are most likely protected by the various studios that produced and released them. It is reasonable to assume that these would not be made legally available in public domain or via Creative Commons as most studios are extremely protective of their intellectual property. The same could be said of images from various TV series…

This part of Google’s response refers to screenshots used in the app’s listing. They used to look something like this…

The images used here are only indicative of the app’s capabilities. Even if (obviously) unlicensed, the app doesn’t promise anything more than control of XBMC content. It doesn’t promise access to studios’ offerings or otherwise act as a movie/TV show portal. In this context, the movie posters displayed in the screenshots would appear to fall under “fair use.” Google’s response to Yatse indicates that, even with a human now involved, the Play Store won’t tolerate the use of unlicensed images in “promotional” screenshots.

In fact, fair use isn’t even discussed. Instead, Google asked Yatse to prove ownership of the disputed artwork before the app could be relisted.

If you are able to prove otherwise, either via direct authorization from a studio representative or the location where you sourced these images (public domain and/or Creative Commons), we could review that information and reconsider the merits of this case.

The motivating factor for this non-consideration is potential litigation, according to the Google Play Team.

This may represent a change from two years ago in that most studios today will file complaints over use of their content unless someone has entered into an agreement with them on some level, and that should not come as a surprise to you.

Even with a direct response, there are still some gray areas the developer is left to address himself.

We are unable to provide specific guidance as to which images may be allowed, but we trust that you will use your best judgment based on what we have mentioned above and in previous communications.

As Yatse points out, this isn’t good news for developers.

The answer is very interesting for all Google Play developers :

– Google will remove your application on suspicions and not on real facts.
– No human will check what you upload or say.
– It’s nearly impossible to have a real contact and support.
– You need to try to fix problem yourself without details and hope to have it fixed before ban. (Very hard when in fact there’s no problem)

Google Play has moved to preemptive takedowns, unprompted by studio complaints. This isn’t a good thing. It may protect Google (but only slightly, considering the studios’ ongoing antipathy towards the tech company) but it does nothing for developers whose sales it takes a portion of.

In response, Yatse has swapped out the offending artwork for CC-licensed and public domain works. But even that wasn’t enough for the Google bots. Those images had to be removed before his app was approved for relisting.

#Yatse is now back on Play Store, without any images until I can figure out what the Google bot does not like in open sources ones.

This understandably limits his options and makes it much harder to convey the app’s functionality. Here are the screenshots currently available at Google Play, which show that Yatse (the app) is probably some sort of remote control program and has some color options. 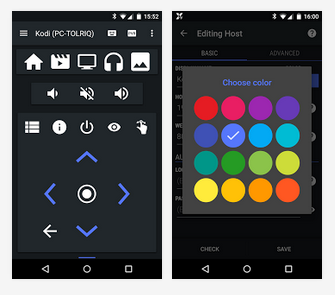 So, based on no complaints from studios or other rights holders, an app comes down. And even with the use of properly-licensed images, it fails to be reinstated. And throughout all of the discussions, fair use isn’t mentioned a single time. That’s the reality of preemptive IP policing, and it’s unlikely to change anytime soon.

Oh, Elsevier. The publishing giant has quite the reputation for its desire to stop people from sharing knowledge unless Elsevier can put up a toll booth. A huge number of academics have signed pledges to boycott Elsevier and not allow their works to be published by the company. Also, in the last few years, there’s been a rapid growth in open access and requirements that research be distributed for free (often under a Creative Commons license).

Almost exactly a year ago, we had a story about Elsevier charging for open access content, and apparently the company hasn’t gotten any better. Ross Mounce recently noticed that Elsevier appeared to be selling a paper on HIV infection for $31.50 + tax (after which you have just 24 hours to download it, or just kiss that money goodbye)

The problem, however, is that the paper was actually published by competing publisher Wiley under an open access Creative Commons license (and is available free of charge on its website). The key author on the paper, Didier Raolt told Mounce that he had no idea why Elsevier was selling his paper, and that he had not given permission. The paper is under a Creative Commons license, but it’s a CC BY-NC-ND 4.0 license. And while I’m not a fan of NC/ND licenses, it’s pretty clear that this license does not allow someone to step in and start selling the paper.