We already wrote about Monday’s unsealed criminal complaint against two government agents who were key players in investigating Silk Road — but who used that position to steal Bitcoins and a lot of other questionable behavior. Now it comes out that the Justice Department revealed the existence of this investigation to Ross Ulbricht’s lawyers five weeks before Ulbricht’s trial — but then blocked Ulbricht’s legal team from using that information, even as the Justice Department continued to rely on evidence from both of the apparently corrupt federal agents. Ulbricht’s lawyer, Joshua Dratel, has put out a statement pointing out some of the problems here:

In addition to keeping any information about the investigation from the defense for nearly nine months, then revealing it only five weeks prior to trial, and then moving to keep sealed and secret the general underlying information so that Mr. Ulbricht could not use it in his defense at trial, and then stymying the defense at every turn during trial when the defense tried to introduce favorable evidence, the government had also refused to agree to the defense’s request to adjourn the trial until after the indictment was returned and made public – a modest adjournment of a couple of months, since it was apparent that the investigation was nearing a conclusion.

Dratel suggests that the corrupt behavior of Force and Bridges raises questions about nearly all aspects of the Ulbricht case, especially since they have already showed that they abused their access to the Silk Road platform in a way that could change the site and account information.

Additional information shows that Force not only acted as “Chief Compliance Officer” for CoinMKT while still employed as a DEA agent (and abusing his ability to use government databases for the job), but as a report from Sarah Jeong at Forbes shows, he also reached out to Mt. Gox CEO Mark Karpeles: 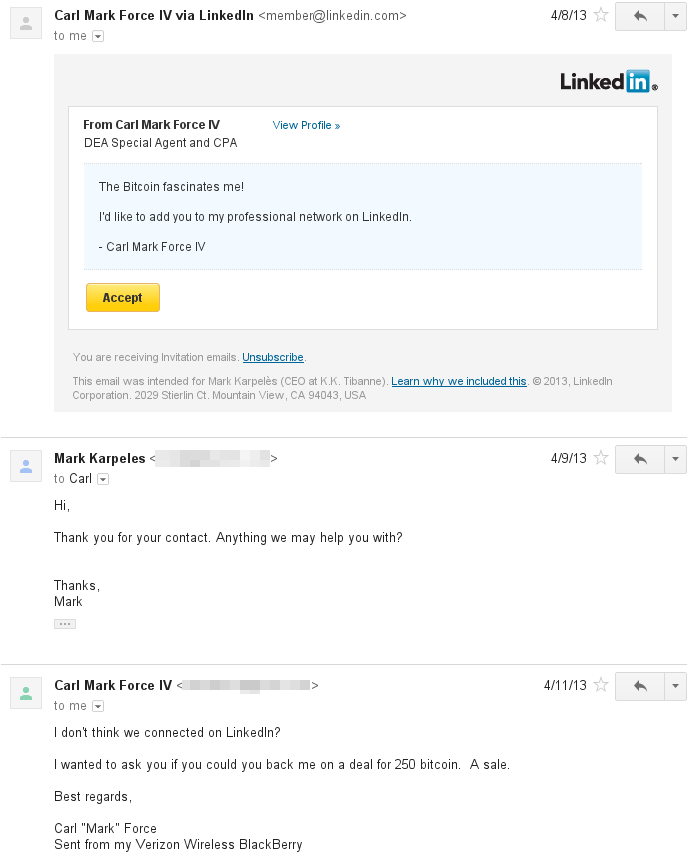 And then even asked about working with Mt. Gox as well, with this bizarre “American government and economy will crash in the next five years” statement:

Just about a month later, when Bridges was the affiant on helping the government seize millions of dollars from Mt. Gox (just days after withdrawing the money he himself allegedly stole from Silk Road), Force emailed Karpeles again, saying “told you should have partnered with me!”

And that doesn’t even get into the fact that the whole “murder plot” that was such a headline grabber in the original criminal complaint only happened after Bridges apparently took the money and Ulbricht reached out to Force to get him to put out a hit on the guy he thought had stolen the money (who had actually been cooperating with the government, which allowed Bridges to get the info to steal the money in the first place).

As we noted in our earlier piece, the criminal complaint shows that Force himself abused his power as a DEA agent to fake a subpoena against Venmo trying to get his own account unfrozen — and it appears that when that didn’t work, Force tried to further abuse his power to seize Venmo’s bank account in response. A snippet from an email he sent to a colleague:

Venmo has since registered with FinCEN, but I want to know if they have state money license remitting licenses in California and New York. Can you check? If not, I want to seize their bank accounts (need to identify them) a la BRIDGES and [M.M.’s] seizure warrants for Mt. Gox.

And here’s the big question: were Bridges and Force really just two “bad apples” in the investigation? Or could it have gone much deeper? As Jeong notes in her report:

During the trial, the defense kept trying to introduce the character of “mr. wonderful,” a Baltimore DHS agent who coerced a Silk Road moderator into giving her account over to law enforcement. Although many of Force’s aliases are listed in the criminal complaint against him, none of them are “mr. wonderful.” (In any case, Force is a DEA agent, and “mr. wonderful” is DHS). Who is mr. wonderful? What exactly did he do?

In other words, whether or not you believe that Ulbricht was DPR, the investigation and trial against him was a complete and utter mess, and these new charges raise an awful lot of questions about the fairness of that trial.