We’re big believers in using HTTPS to secure websites (even if HTTPS certificates have their problems — it’s still better than the alternative). But there are pitfalls in setting up your certificate correctly as newly announced presidential candidate Senator Ted Cruz apparently discovered this morning. Because along with his campaign launch speech (which was widely mocked by the Liberty University students who were forced to attend), he put up a website for donations. And that website didn’t default to HTTPS and also listed nigerian-prince.com as an alternate domain on the security certificate, as first noted by the Twitter feed@PwnAllTheThings: 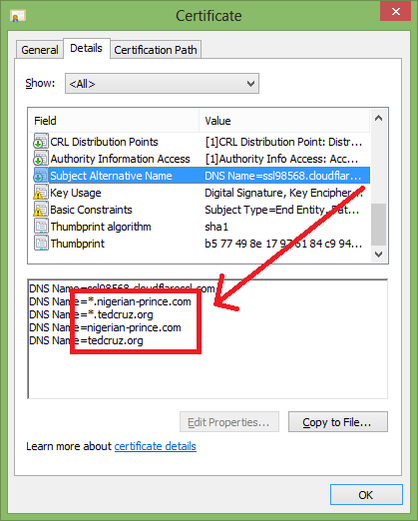 A few hours after this was first noticed, the Cruz campaign appears to have removed nigerian-prince.com from its certificate, but it still raises some questions about just who he has hired to build his websites. I guess that’s what happens when even the technologists in your own partyopenly mock Ted Cruz’s ignorance when it comes to technology issues like net neutrality.