Monday’s guilty verdict in the trial of former CIA officer Jeffrey Sterling on espionage charges — for talking to a newspaper reporter — is the latest milepost on the dark and dismal path Barack Obama has traveled since his inaugural promises to usher in a “new era of openness.”

Far from rejecting the authoritarian bent of his presidential predecessor, Obama has simply adjusted it, adding his own personal touches, most notably an enthusiasm for criminally prosecuting the kinds of leaks that are essential to a free press.

The Sterling case – especially in light of Obama’s complicity in the cover-up of torture during the Bush administration – sends a clear message to people in government service: You won’t get in trouble as long as you do what you’re told (even torture people). But if you talk to a reporter and tell him something we want kept secret, we will spare no effort to destroy you.

There’s really no sign any more of the former community organizer who joyously declared on his first full day in office that “there’s been too much secrecy in this city… Starting today, every agency and department should know that this administration stands on the side not of those who seek to withhold information but those who seek to make it known.”

Instead, as author Scott Horton explained to me a few weeks ago, Obama’s thinking on these issues was swayed by John Brennan, the former senior adviser he eventually named CIA director. And for Brennan and his ilk, secrecy is a core value — partly for legitimate national security reasons and partly as an impregnable shield against embarrassment and accountability.

“The updated firmware (V3.10) will be released in coming days and adds a No-Fly Zone centered on downtown Washington, DC and extends for a 25 kilometer (15.5 mile) radius in all directions. Phantom pilots in this area will not be able to take off from or fly into this airspace.”

A dealer in Handsworth, Birmingham—who would only give his name as “K2″—told me: “I’ve got three Nokia 8210 phones and have been told they can be trusted, unlike these iPhones and new phones, which the police can easily [use to] find out where you’ve been… Every dealer I know uses old phones, and the Nokia 8210 is the one everyone wants because of how small it is and how long the battery lasts.

I can honestly say I don’t understand this. It’s a tea cup that will melt and become useless. 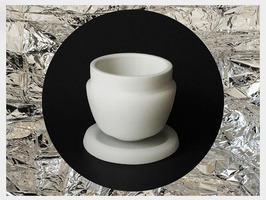 tCup is a ceramic & wax cup that delicately forms to your hands shape as it melts slowly, creating a bond between user and product.

A concerted campaign among officials on both sides of the Atlantic to attack strong encryption has intensified in the wake of the Charlie Hebdo killings. Most recently, we’ve had a leak of a document in which the EU’s “Counter-Terrorism Co-ordinator” recommended that Internet companies should be forced to hand over their crypto keys; and now Leslie Caldwell, an assistant attorney general at the US Justice Department, is reported by Vice.com to have made the following comment:

“We understand the value of encryption and the importance of security,” she said. “But we’re very concerned they not lead to the creation of what I would call a ‘zone of lawlessness,’ where there’s evidence that we could have lawful access through a court order that we’re prohibited from getting because of a company’s technological choices.”

She said that she hopes Apple and Google will consider building in back doors that will allow the companies to decrypt the phones if they are physically mailed back to the manufacturer.
As Techdirt has noted before, this narrative plays right into the hands of repressive governments around the world, which can simply point to the West’s argument, and say: “We agree.” So it will not come as a huge surprise to readers of this site to learn that when it comes to demanding encryption keys and backdoors from computer companies, China now agrees:

The Chinese government has adopted new regulations requiring companies that sell computer equipment to Chinese banks to turn over secret source code, submit to invasive audits and build so-called back doors into hardware and software, according to a copy of the rules obtained by foreign technology companies that do billions of dollars’ worth of business in China.

According to Gidari, whose firm has represented both firms, Google’s delay was not the result of foot-dragging but of opposition from prosecutors who were upset by the backlash that followed the disclosure of their court orders to Twitter.

“The U.S. attorney’s office thought the notice and the resulting publicity was a disaster for them,” Gidari said. “They were very upset” about the prosecutor’s name and phone number being disclosed, he said. “They went through the roof.” 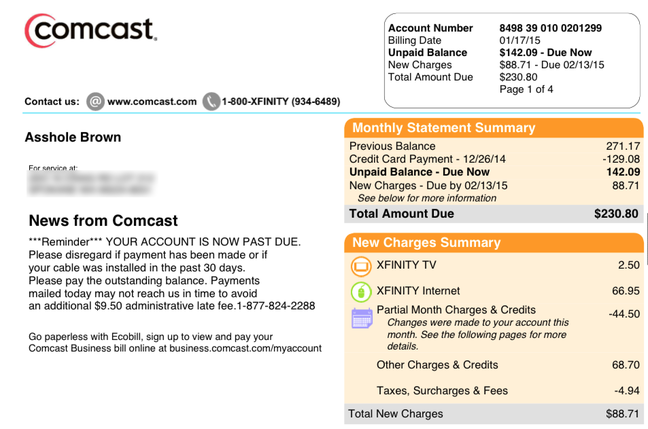 The story goes that Mrs Brown tried to have a TV package dropped from their cable broadband service to save some money each month.

She called the telco’s customer call center, knowing she would have to pay US$60 (£40, AU$76) to do so, and was bounced to a specialist rep whose job is to talk people out of canceling or dropping packages. Brown stuck to her guns, and refused to change her mind.

Not long after, the couple received a bill to “Asshole Brown” at their home address.

Mrs Brown told Elliott she had phoned Comcast execs and visited its nearest store to complain, and to have the name change reversed – but apparently to no avail.

“I was never rude. I am shocked. This is unacceptable,” Mrs Brown told Elliott. “I am requesting everything back I paid Comcast for doing this to me.”

She added that she believed the “retention specialist” she spoke to changed her partner’s name on the account.

The investigative arm of the Department of Justice is attempting to short-circuit the legal checks of the Fourth Amendment by requesting a change in the Federal Rules of Criminal Procedure. These procedural rules dictate how law enforcement agencies must conduct criminal prosecutions, from investigation to trial. Any deviations from the rules can have serious consequences, including dismissal of a case. The specific rule the FBI is targeting outlines the terms for obtaining a search warrant. It’s called Federal Rule 41(b), and the requested change would allow law enforcement to obtain a warrant to search electronic data without providing any specific details as long as the target computer location has been hidden through a technical tool like Tor or a virtual private network. It would also allow nonspecific search warrants where computers have been intentionally damaged (such as through botnets, but also through common malware and viruses) and are in five or more separate federal judicial districts. Furthermore, the provision would allow investigators to seize electronically stored information regardless of whether that information is stored inside or outside the court’s jurisdiction.

Rep. Jared Polis has a bit of a history of making hilarious, but incredibly on point, sarcastic and satirical suggestions in response to government officials saying something stupid. Last year, he asked the Treasury Department to ban dollar bills after Senator Joe Manchin asked the Treasury Department to ban Bitcoin. Polis, of course, took the same arguments Manchin used against Bitcoin and highlighted how dollar bills had the same characteristics.

His latest move is in response to Senator Marco Rubio’s ridiculous and clueless call for greater levels of mass surveillance of Americans. Rubio calls for new laws to force tech companies to help the government spy on everyone and also a permanent extension of the controversial Section 215 of the Patriot Act, the part of the law that was twisted by the DOJ and the NSA to pretend it means they can demand every phone record on every American because they might be able to sniff through it all and find something interesting.

In response, Polis has asked the US Intelligence Community to begin “24 hour monitoring” of Senator Rubio