The Department of Justice and its underlings (the FBI and nearyl every law enforcement agency in the nation) have turned the ideal of asset forfeiture (defund drug dealers; return money to the defrauded, etc.) into a free-roaming, many-tentacled opportunistic beast, one that “liberates” any amount of “suspicious” cash from tourists, legitimate business owners or anyone else who just happens to have “too much” cash in their possession.

The IRS is in on this as well. The agency doesn’t need to prove anyone is guilty of anything before seizing assets. It just needs to feel that things aren’t quite right.

For almost 40 years, Carole Hinders has dished out Mexican specialties at her modest cash-only restaurant. For just as long, she deposited the earnings at a small bank branch a block away — until last year, when two tax agents knocked on her door and informed her that they had seized her checking account, almost $33,000.

The Internal Revenue Service agents did not accuse Ms. Hinders of money laundering or cheating on her taxes — in fact, she has not been charged with any crime. Instead, the money was seized solely because she had deposited less than $10,000 at a time, which they viewed as an attempt to avoid triggering a required government report.
The person whose money has been seized isn’t necessarily guilty of anything. Hinders hasn’t been arrested, nor does there appear to be any sort of ongoing investigation. The IRS hasn’t hit Hinders with tax liens for unpaid taxes or subjected her to an audit. All it did was look at records for her deposits and decide that because none of them surpassed the $10,000 mark (which triggers automatic reporting), everything in the account must be somehow illegal.

Another argument for default phone encryption: to keep criminals from accessing your personal photos and sharing them with others.

CHP Officer Sean Harrington, 35, of Martinez… confessed to stealing explicit photos from the cellphone of a second Contra Costa County DUI suspect in August and forwarding those images to at least two CHP colleagues. The five-year CHP veteran called it a “game” among officers, according to an Oct. 14 search warrant affidavit.
That this criminal (and his criminal cohorts) happened to wear a uniform makes him no less of a criminal. The difference here is that the phone containing the photos wasn’t stolen by a criminal but rather seized during a DUI arrest and accessed during booking.
[T]he investigation began with a single incident: Harrington’s conduct during the Aug. 29 arrest of the San Ramon woman. The woman discovered that photos had been stolen from her phone five days after her release, when she noticed on her iPad that the photos had been sent to an unknown number. A record of the messages had been deleted from her iPhone, but the phone had been synced to the iPad.

In his investigation, Holcombe compared video surveillance and time-stamped text messages from the woman’s phone and determined Harrington was in possession of the woman’s phone at the moment the photos were forwarded. The woman — who registered a blood-alcohol level of 0.29 percent, more than three times the legal limit — was being processed in the Martinez County Jail when the photos were stolen, according to court records.

Good luck with that. If these guys actually manage it, there’s a Nobel Price in biology waiting. “Who Has Your Back: When Copyright and Trademark Bullies Threaten Free Speech” examines how online service providers handle copyright and trademark-based takedown requests. The report expands upon EFF’s influential “Who Has Your Back” annual report covering how online service providers protect users’ data from government requests.

“When a private citizen or corporation wants to silence speech on a major online platform, the quickest method is often a copyright or trademark complaint,” EFF Director of Copyright Activism Parker Higgins said. “EFF has worked for many years to help people whose speech is unfairly targeted by these sorts of complaints, and we’ve seen how important it is that speech platforms have policies that help protect lawful users.” 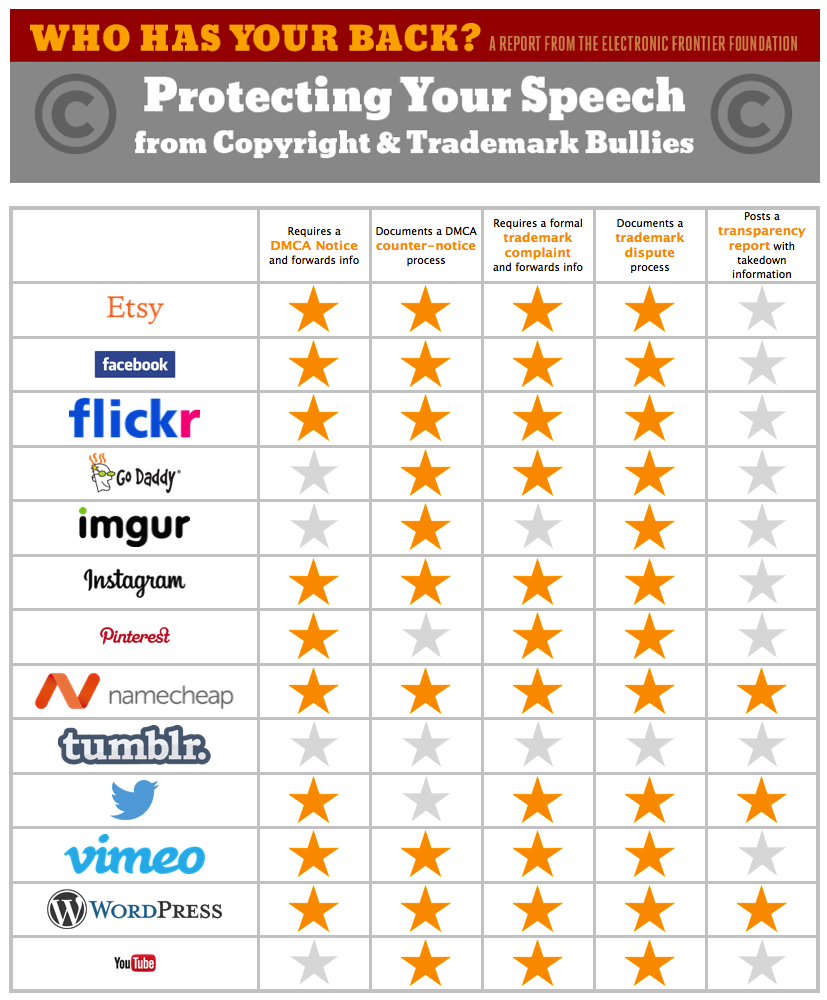 I almost wished I was Australian, so I could sign up for iiNet:

We’ve written a number of times about the strong, principled stand of Australian ISP iiNet for the rights of its consumers. iiNet was the ISP that was handpicked by Hollywood and the US State Departmenet to be the target of a “test” legal attack, trying to force ISPs to spy on users and become copyright cops. iiNet was targeted because Hollywood felt that the company wasn’t large enough to fight back, but was big enough to get noticed. Hollywood miscalculated on one-half of that equation: iiNet fought back. And it fought back hard. And it won. And then it won again. And then it won again, in a fight that Hollywood is still licking its wounds over (and trying to undermine with new laws). iiNet has also fought back against data retention rules.

Edit: I originally wrote Peter and not Stefan. It has now been corrected.

I really think Stefan Molyneux should lose this case, just so we can finally get some legal precedent regarding DMCA abuse. The world really needs it, since the major studios are running rampant, sending DMCA take-downs for anything that remotely resembles pirated goods.

A few months ago, we wrote about the strange saga of self-described “anarcho-capitalist” Stefan Molyneux more or less admitting that he and a colleague named Michael DeMarco had filed questionable DMCA notices in response to some critical YouTube videos. DeMarco and Molyneux defended the use of the DMCA by arguing that the videos involved doxxing some Molyneux supporters. While that may have been true of some, it did not appear to be the case with one account, from so-called “Tru Shibes,” whose videos were pretty focused on criticizing Molyneux himself. Either way, we found it especially bizarre that someone so against “state violence” of any kind (and who had spoken out against intellectual property entirely) would then resort to abusing government-run copyright law to silence criticism. Even worse, Molyneux flat out admitted (on a Joe Rogan podcast) that he wasn’t using the DMCA for any copyright-related purpose. In that post, I noted that it seemed unlikely to lead to a lawsuit, but Molyneux had probably opened himself up to a DMCA 512(f) claim for “materially misrepresenting” a copyright claim.

Apparently, I underestimated the person behind the Tru Shibes account, because late last week, she sued Molyneux (pdf) with a 512(f) claim, and a defamation claim as well. The plaintiff, who only identifies herself as “J. Raven,” describes in detail the critique videos she had created, challenging some of Molyneux’s statements. But the overall point of the lawsuit is to highlight the (admitted) abuse of the DMCA. The defamation claim is in response to Molyneux implying that Tru Shibes was engaged in doxxing Molyneux supporters. The filing details how Molyneux/DeMarco clearly did not use the DMCA for copyright purposes, but to silence a critic. It further details how even if there was a copyright claim, Tru Shibes’ use was clearly fair use.

To quote a commenter to the story:

Well its official. The terrorists have won.
They have us quaking in our boots, sensitive to the slightest little thing.

A US airline delayed a flight on Sunday evening after an unidentified person somewhere in or around Los Angeles International Airport picked a rather unfortunate name for a Wi-Fi hotspot.

Just for reference, you (even if you’re a law abiding citizen) are a lot more likely to be killed or hurt by a police officer than a terrorist…

Over the past year, the Seattle police department has revised its policies on when police can use force, as part of a settlement with the Justice Department over findings that officers used frequent excessive, unconstitutional force on suspects.
But some 125 Seattle police officers responded by filing a lawsuit challenging the new rules. In their view, the new policies infringe on their rights to use as much force as they deem necessary in self-protection. They represent about ten percent of the Seattle Police Officers’ Guild membership. The police union itself declined to endorse the lawsuit.
This week, a federal judge summarily rejected all of their claims, finding that they were without constitutional merit, and that she would have been surprised if such allegations of excessive force by officers did not lead to stricter standards.
The officers claimed the policies infringed on their rights under their Second Amendment and under the Fourth, claiming a self-defense right to use force. Chief U.S. District Judge Marsha Pechman pointed out that the Second Amendment protects the right to bear arms — not the right to use them — and that the officers “grossly misconstrued” the Fourth Amendment when they claimed that it protects them, and not individuals who would be the subjects of police force or seizures.

According to sources familiar with the CIA inspector general report that details the alleged abuses by agency officials, CIA agents impersonated Senate staffers in order to gain access to Senate communications and drafts of the Intelligence Committee investigation. These sources requested anonymity because the details of the agency’s inspector general report remain classified.

“If people knew the details of what they actually did to hack into the Senate computers to go search for the torture document, jaws would drop. It’s straight out of a movie,” said one Senate source familiar with the document.

I think I wholeheartedly agree with Your Kickstarter Sucks here:

the goal of this kickstarter is to raise money to purchase advertising encouraging valve to release half-life 3. can’t tell if this is trolling for sucker dollars or legitimately completely lacking in self-awareness but based on the fucking turbonerds in the video i’m leaning toward the latter