Police were summoned to a high school after a boy wrote a story about using a gun to kill a dinosaur. The boy was searched, suspended from school, and subsequently handcuffed and arrested when he did not handle the interrogation calmly.

Over the weekend, Engadget had a post claiming that India has said it’s illegal to “like” blasphemous content. The headline there somewhat misstates what’s actually happening, but what’s actually going on is no less ridiculous. It is not all of India, but rather the state of Karnataka (which includes the city of Bangalore), which has passed a new law officially called “The Karnataka Prevention of Dangerous Activities of Bootleggers, Drug-offenders, Gamblers, Goondas, Immoral Traffic Offenders, Slum-Grabbers and Video or Audio Pirates (Amendment) Bill, 2014” though it is being locally referred to as the Goonda Act. The main thing it has done is taken offenses under the Information Technology Act, 2000, and Indian Copyright Act, 1957, and let the government take people into preventative custody if they think you’re going to break one of those laws. And, the law is written so broadly that it can also potentially be used against various activities online

There have been increasingly vocal calls for Twitter, Facebook and other Silicon Valley corporations to more aggressively police what their users are permitted to see and read. Last month in The Washington Post, for instance, MSNBC host Ronan Farrow demanded that social media companies ban the accounts of “terrorists” who issue “direct calls” for violence.

We’ve seen some unique interpretation of copyright law over the years, but generally the really big companies — especially content-driven companies — have semi-decent lawyers. So it’s just bizarre and surprising that media giant Thomson Reuters apparently believes that it can license whatever content it wants by merely sending an email and saying that a refusal to respond will be taken as consent that it can use your content.

What we’re seeing here is a gaggle of cops wearing more elite killing gear than your average squad leader leading a foot patrol through the most hostile sands or hills of Afghanistan. They are equipped with Kevlar helmets, assault-friendly gas masks, combat gloves and knee pads (all four of them), woodland Marine Pattern utility trousers, tactical body armor vests, about 120 to 180 rounds for each shooter, semiautomatic pistols attached to their thighs, disposable handcuff restraints hanging from their vests, close-quarter-battle receivers for their M4 carbine rifles and Advanced Combat Optical Gunsights. In other words, they’re itching for a fight. A big one. It’s a well-known horror that the US military greets foreign peoples in this fashion as our politicians preach freedom, democracy and peace. It’s an abomination that the police greet black communities in the States with the same trigger-happy posture. Especially on the occasion of an unarmed teen’s death by cop. … but they will also probably make you look like a jerk. 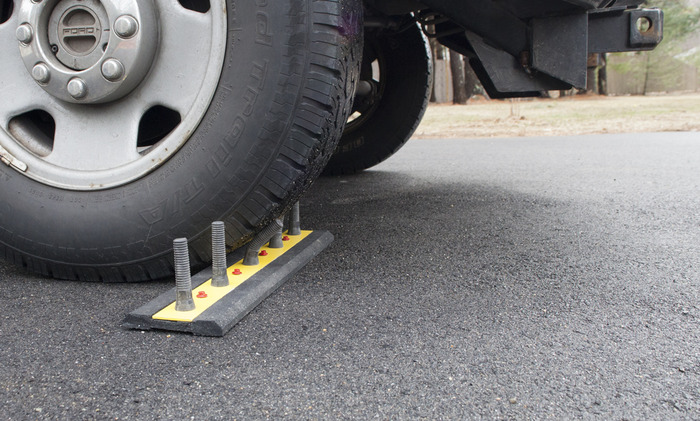 Drivewayspikes are an excellent alternative to expensive gates, chains, rope, or other driveway barriers. And convenient! Available in xx and xx lengths, and are built of safe and flexible eco-friendly material and reflective coating that will not damage your vehicle. In fact, you can drive right over them and avoid the hassle of having to get in and out of your car in inclement weather to move them. To the average driver contemplating a U-turn; the spikes appear dangerous and serve as a deterrent. With Driveway spikes, no more getting out of your car to enter your own driveway!

A Register reporter has been let away with a slap on the wrist after confessing to, what the cops claim, is an act of terrorism.

According to the Metropolitan Police, anyone caught watching a sickening beheading video will be treated like a terrorist. Lawyer and legal commentator David Allen Green challenged that claim – and we were sceptical, too.

The Met’s statement read: “We would like to remind the public that viewing, downloading or disseminating extremist material within the UK may constitute an offence under Terrorism legislation.”

But if you believe (or know) that the cop stopping you is violating your rights or is acting like a bully, I guarantee that the situation will not become easier if you show your anger and resentment. Worse, initiating a physical confrontation is a sure recipe for getting hurt. Police are legally permitted to use deadly force when they assess a serious threat to their or someone else’s life. Save your anger for later, and channel it appropriately. Do what the officer tells you to and it will end safely for both of you. We have a justice system in which you are presumed innocent; if a cop can do his or her job unmolested, that system can run its course. Later, you can ask for a supervisor, lodge a complaint or contact civil rights organizations if you believe your rights were violated. Feel free to sue the police! Just don’t challenge a cop during a stop.